Support The Art of Marci - Furries! on Patreon! 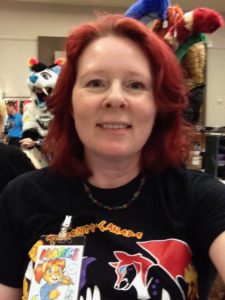 I was born in the 70’s in rural Canada, so you can’t blame me for being a flower child. Plus, I grew up in the 80’s, which explains the rainbows and my obsession with colour (and secretly I still hope unicorns exist).

As a kid, I was influenced by picture books, horse stories, Narnia, Disney, and Care Bears. When I was a young teenager I discovered comic books like Captain Carrot and Elf Quest. Now, living under the big Alberta sky at the foot of the Rocky Mountains, I’m influenced by artists such as Ted Harrison and Mark A. Jacobson (plus all the other stuff). I’ve been drawing animal people all my life, and I’ve been attending furry conventions since 1991.

I live in Calgary, Alberta with my wife, two sons (who have wild imaginations of their own), and our were-pug Lily (who likes food, sleeping, and barking at strangers). My faves: traveling, hanging out in cafés, watching movies, nature (but not when it crawls on me), and reading (voraciously).

Things you probably didn’t know about me:
I’m a Star Trek geek (I was actually part of a Star Trek fan club in my 20’s)
My first job was as a cake decorator at Dairy Queen
I actually paid to have my first story published in a comic book (I was 16)

I adore making a living doing what I love (and not having to rush through my morning coffee). I’ve done illustrations for teaching materials, comic books, commissions, window painting, and lots of other stuff. I also love teaching art and traveling to conventions to draw. I’ve been a full-time freelance illustrator since 2001, and I’m currently working on writing and illustrating children’s books.

Your cart is empty

Subtotal
Shipping and discount codes are added at checkout.
Checkout